Berkshire Taconic Community Foundation is here for the long term and committed to transparency about our investments and operations. 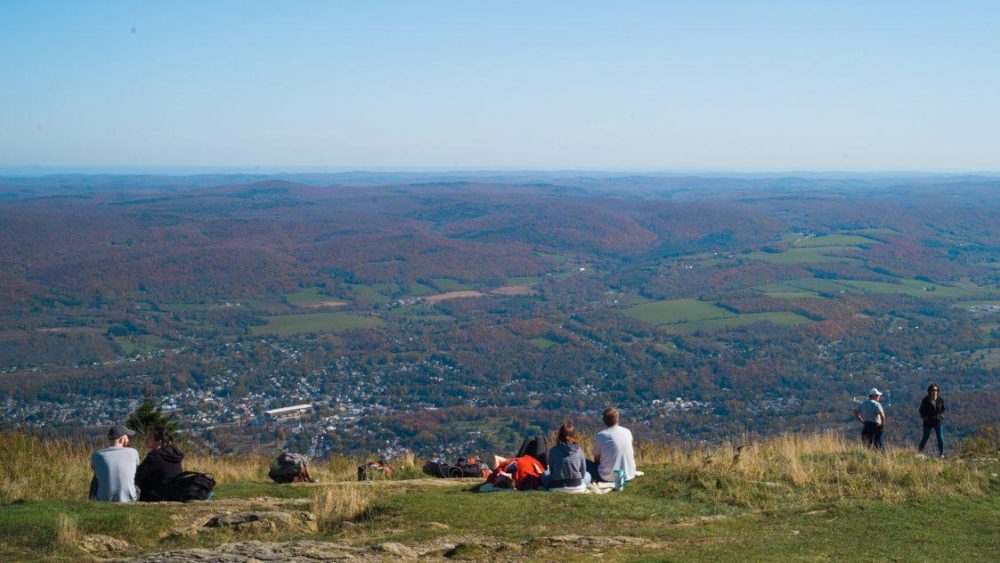 As stewards of the charitable funds entrusted to us, Berkshire Taconic Community Foundation is committed to seeking the best possible returns while minimizing risk so that donors can grant more to the communities and causes they care about—now and for years to come.

Investment Performance as of September 30, 2022

Created for the bulk of our funds’ assets and structured on the premise that a bias toward quality equity investments will ensure the best total return over time, although it may be more volatile over the short-term. Average annual investment manager fees total 1%.

During the third quarter of 2022, investor sentiment was primarily negative. Markets faced inflationary pressures, rising interest rates and geopolitical risks. The U.S. Fed raised rates by 75bps for the 4th consecutive quarter. Russia continued to escalate tensions associated with its war in Ukraine and there were no definitive signs that inflation has hit its peak.

Fixed income faced two critical challenges: the highest level of inflation since the 1970’s and a sharp tightening cycle. The Bloomberg Aggregate returned -4.8% during the quarter.

Created in March 2009 for those individuals or organizations that want fund assets invested with an environmental, social and governance screen, that is better aligned with their values and the foundation’s mission and vision. The average annual investment management fee is 0.45% and the allocation is 60% equities and 40% fixed income and cash equivalents.

The SRI portfolio declined by 5.2% during the quarter, ahead of the policy benchmark by 0.4%. The portfolio has $17.2 million in assets

Appropriate for funds where minimizing risk and not being subject to short-term equity volatility is important. This pool does not take advantage of potential long-term equity growth. The average annual investment management fee is 0.46% and the allocation is 100% fixed income and cash equivalents.

The SRI portfolio declined by 5.2% during the quarter, ahead of the policy benchmark by 0.4%. The portfolio has $17.2 million in assets.

Accommodates funds that are generally short term in nature and are focused on investment of capital with minimal risk. The return fluctuates with daily money market rates. The investment management fee is 0.0% for this Pool.

“Our long-term goal is to deliver strong returns that outperform the market in up and down markets.”

Watch our recent Investing for Good webinar to learn how we invest and manage our funds for community impact.

BTCF's investment program is guided by a group of board (*) and community members with extensive experience in institutional investments who together provide a broad range of expertise in different asset classes and employ top investment managers in each class.

Appointed by the foundation's board of directors from its members and others in the community, the Investment Committee meets at least quarterly to review performance, rebalance the porfolio, meet with current and prospective managers, discuss market conditions and long-term strategy, and establish overall manager-specific benchmarks.

Our Investment Committee is supported and advised by the foundation's Vice President for Finance and Administration and Prime Buchholz of Portsmouth, N.H. Prime Buchholz is one of the country’s most reputable investment consulting firms, and its experienced team works closely with community foundations, hospitals, schools, faith-based organizations and other clients.

Liz Hilpman serves as president and chief investment officer of Barlow Partners, an investment advisory firm in New York City she joined in 2001. Prior to joining Barlow, Liz was a vice president of investments at Commonfund; an investment manager with Global Asset Management; an investment officer working in the endowment community at Dartmouth College; and the director of Alternative Manager Research at Dubin & Swieca. She is a frequent speaker at hedge fund conferences on the subjects of asset allocation, manager selection and monitoring. She has served on a number of nonprofit boards, including Jacob’s Pillow Dance Festival and the Cary Institute, and in leadership roles on the investment committees of several nonprofit organizations, including as chair of the investment committee of the Maine Community Foundation. She has served on the BTCF investment committee as a community member since 2013. She holds a B.A. from the University of New Hampshire and resides part-time with her husband in Norfolk, Conn.

Thaddeus Gray retired as a managing director at Abbott Capital Management, LLC, a New York-based investment advisor focused exclusively on private equity, in 2017. Thaddeus was chief investment officer and a member of Abbott’s executive committee. Prior to this, Thaddeus worked as syndicate manager/assistant vice president for Commerzbank Capital Markets Corporation and as an analyst in the Corporate Finance Department for Credit Commercial de France in Paris. He also serves on the board of the East Side Settlement House in New York. He served on the Sharon Association board and was co-chairman of the Security and Street Life Committee for Community Board 8 in Manhattan. He has served as a community member of the Berkshire Taconic Investment Committee since March 2013. Thaddeus, a native of Litchfield County, is a graduate of University of Pennsylvania and New York University Graduate School of Business Administration. He resides with his family in Lakeville, Conn.

Elizabeth Hewitt joined the Alfred P. Sloan Foundation in 2015 as chief investment officer and senior vice president. She is responsible for managing the foundation’s endowment, including asset allocation strategy, fund manager selection, risk analysis, portfolio performance evaluation and liquidity management. Prior to joining the foundation, Elizabeth was managing director of public investments at the Robert Wood Johnson Foundation, where she selected and monitored investments with managers, participated on the institutions risk assessment committee and contributed to overall portfolio management. Earlier in her career, she was a senior vice president for Lazard Asset Management (2001-2006), a hedge fund analyst for The Torrey Funds (1999-2001), and a wealth management associate for the U.S. Trust Corporation (1998-1999). She holds an M.A. from the University of St. Andrews, Scotland. Elizabeth is a trustee of the Cary Institute of Ecosystem Studies in Millbrook, N.Y., where she has a residence.

Kelly Morgan is managing director at PRIO Wealth, formerly Seaward Management. Prior to joining Seaward in July 2008, Kelly spent 11 years with Putnam Investments in Boston. Initially, she was the lead portfolio manager on global growth retail and institutional portfolios, and then became head of global equity research prior to becoming chief investment officer for all retail and institutional U.S. large cap growth portfolios. Prior to Putnam, Kelly spent 10 years managing Global Growth Equity portfolios for Alliance Capital Management in New York and London. Before graduate school, she spent two years as an analyst with Morgan Stanley Asset Management. Kelly received her undergraduate degree in mathematics from Middlebury College (Phi Beta Kappa, Summa Cum Laude) in 1984. She earned her MBA from Harvard Business School in 1988.

Ann Goodbody retired from Citibank, N.A. in 2002, after spending 32 years there in various positions in the insurance and real estate divisions of corporate banking. In 1995, she became head of capital management for the holding company, Citicorp and its subsidiaries, and in that capacity had oversight for its capital adequacy, its debt and equity issues and its acquisitions and divestitures. She also became a member of the Market Risk Policy Committee, providing oversight for liquidity and market risk positions in North America. She was appointed an executive vice president in 1997 and became the chair of credit policy, responsible for the policies and procedures governing global corporate and consumer credit activities. Subsequent to the merger that created Citigroup, she became the head of credit risk management for Citibank in the 80 countries in the Emerging Markets where the bank had a presence. Ann graduated from Fordham University in 1968 with a B.S. in Economics. After a brief time on Wall Street, she joined Citibank, N.A., then named First National City Bank, and became part of the early cadre of women pursuing careers in banking and finance. She was the first woman to be appointed to the chief credit officer position of a major banking institution. She served on the board of Berkshire Taconic for nine years and is the immediate past chair of the committee.

Thomas Quinn is an investment adviser with over 30 years of experience in banking, investment management and commercial property. He is the former global head of Real Estate Investment Management (REIM) of UBS Wealth Management and Business Banking, a position he held from 2004 to 2009. Prior to joining UBS in April 2004, he founded and managed TS Quinn Associates, LLC, a real estate investment management firm. Before that, he spent 23 years at JP Morgan where he held various senior management positions. From 1994 to 2001, Tom was responsible for JP Morgan's proprietary private equity investments in the real estate sector. He previously had a broad range of assignments in corporate finance and investment banking, including positions in New York, Mexico City and London. Tom is a director of Alpha Investment Partners Limited, a real estate investment management firm in Singapore, a trustee of The Hotchkiss School and a former member of the National Real Estate Advisory Board of the Nature Conservancy. He is a graduate of Dartmouth College (B.A.) and Middlebury College (M.A.).

Daphne Richards serves as president and CIO of Ledge Harbor Management, a single-family office, as of its formation in September 2016. Previously Daphne worked at Bessemer Trust Company, New York, from 1999 to 2014, where she was a managing director, head of hedge fund investments and co-head of Bessemer’s $5 billion Alternative Investment Group. She was a member of the investment committees for Bessemer's private equity/venture capital and real estate/real assets programs, and she chaired the hedge fund investment committee. She also served as a member of Bessemer’s Investment Policy and Strategy Committee. Prior to Bessemer, Daphne held senior investment roles at Frank Russell Company, Union Bank of Switzerland and Credit Suisse. Daphne is an independent director of Cartica Capital Management LLC and of Cohen and Steers Mutual Funds. Daphne is a member of the Northeast Dutchess Fund advisory committee. She holds a B.A. from Georgetown University and has a residence in Stanfordville, N.Y.

Founded in 1987 with an anonymous donation of $100,000, we now manage charitable assets of just under $232 million. Through sophisticated investing, careful management of operating expenses and generous contributions from individuals, families and organizations, we continue to grow and serve as an enduring source of support for current and future needs.