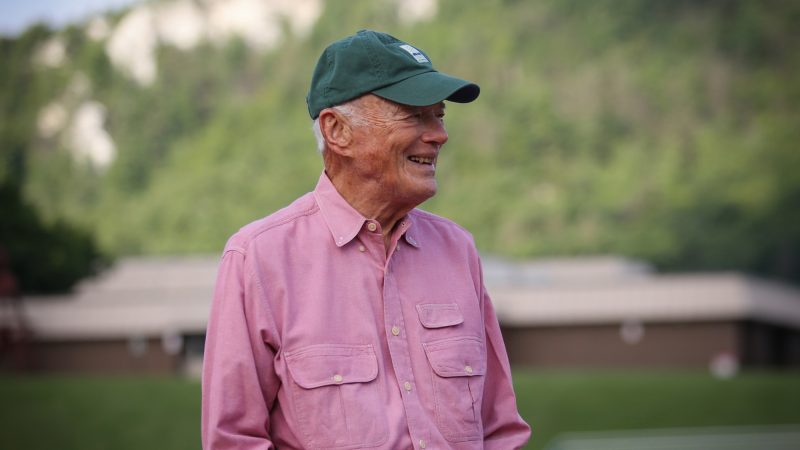 Nick Boraski can easily summon a boyhood memory of the Great Depression.

It is evening, and there is a knock at the door of his Dalton, Mass. home. His mother opens it to find a “fellow in bib overalls” with a young child in tow. Strangers, they are looking for something to eat.

Without thinking twice, Nick’s mother sits the pair down at her table and feeds them. Afterward, she says to the man, “I’m going to dress your boy in something else.” She disappears upstairs, and returns with an armful of clothing. It is an especially benevolent act for someone with seven children of her own.

“We never had any money,” Nick says, recalling the episode. “But that was my mother. We had a huge vegetable garden and she was always giving food away. It was just natural to her.”

Now 87, Nick lived a “wonderful life as a team” with his late wife, Ruth—by working hard, seizing opportunities and benefiting from occasional runs of good luck. And like his mother taught him, he has given back to his community unreservedly.

“Every student who has the ability should be given a chance to pursue higher education.”

An early graduate from high school, he attended Duke University for a semester before enlisting in the Navy. After earning a degree from the University of Massachusetts, he built a highly successful career at General Electric, where his training as an engineer and, more importantly, his leadership skills propelled him to the top ranks.

Early on, he met and married Ruth, in a true partnership of equals.

As Nick advanced at GE, Ruth raised three children, fed and walked a succession of Labradors, and graciously entertained Nick’s colleagues and customers. Both were very involved in their communities—churches and charities, hospitals and schools—and became interested in economic development. “Totally supportive” of Nick’s career, his beloved Ruth steadily exerted her influence. Whenever Nick’s “talk” threatened to outpace his “walk,” she was there to keep his ego in check.

But Nick has reason to be proud of himself and his family. His parents, who left Ukraine separately as teenagers, saw all seven children through to high school graduation, and four of them on to college, despite his father’s modest earnings as a beater engineer at Crane & Co.

His children have thrived, and his six grandchildren are spread out across the country and in Canada, stretching their talents as a Ph.D. student, a master furniture craftsman and a cowgirl, among other pursuits.

Nick attributes his professional success to an excellent education at UMass, GE’s training programs and his native ability to “quickly separate the wheat from the chaff.” The recipient of two honorary doctoral degrees, he rose to vice president of operations at GE and earned his reputation running “safe, quality, efficient organizations.” At several points, he had thousands of people working under him.

These days, the heads he’s counting are scholarship recipients and program participants. Nick and Ruth’s astonishing charitable activity began decades ago, when Nick became a champion of public education through committee work, school board service and, ultimately, an appointment to the Massachusetts Board of Regents.

Without so much as a single request, Nick and Ruth began establishing permanent endowments at schools, colleges and universities, as well as museums and theatres, across Berkshire County. Today, their generosity provides over 50 annual scholarships of $1,000 to $10,000 each, as well as yearly funding for six children’s programs.

Last year, in a nod to his own remarkable path, Nick created the Nicholas Boraski Scholarship for a college-bound Berkshire County student—a “hidden gem” whose potential may not be fully realized, but who exhibits curiosity and drive nonetheless.

“I was the diamond in the rough,” Nick says. “But after discharge from the Navy, I returned to the university—wow! I received all high grades. This made me realize that either I had gotten smarter or, more likely, the ‘diamond had begun to sparkle.’”

He hopes that with the boost this scholarship provides, its recipients will have similar epiphanies and find success in their chosen fields.

“Every student who has the ability should be given a chance to pursue higher education,” Nick says.

In other words, the knocks at Nick’s door—and the unhesitating offers of help—will go on, now and for years to come.